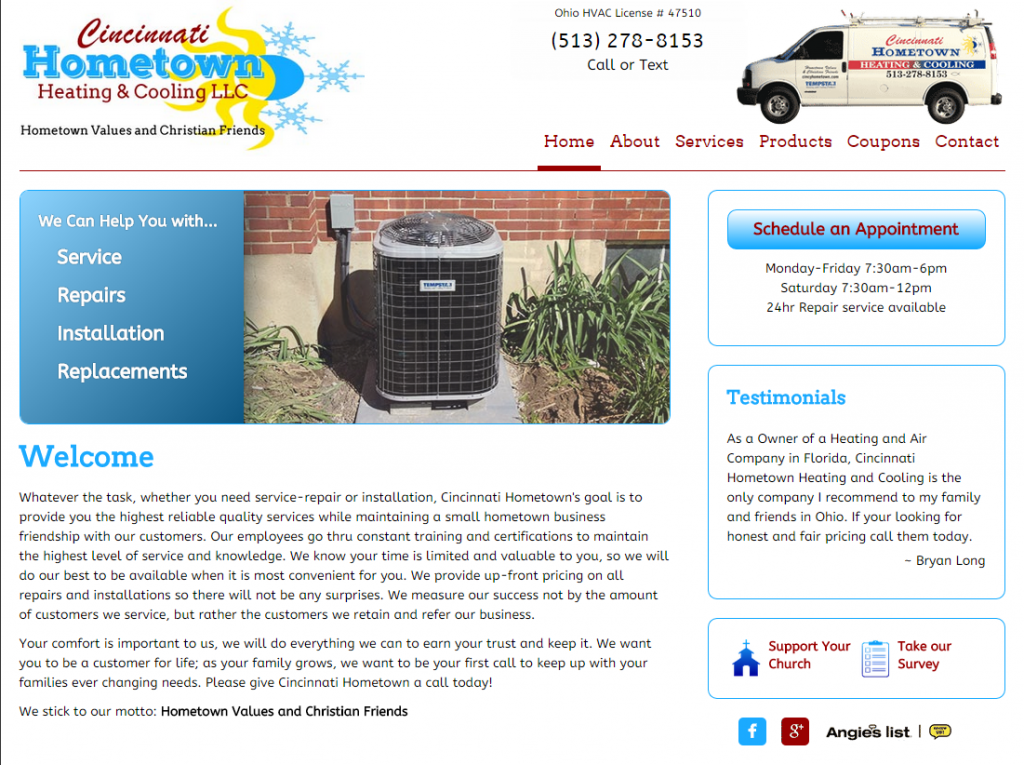 This website was developed for a local heating and cooling company. This relatively new business needed a way to advertise their business online while providing additional information for customers about the services, programs, and products that they provide. Furthermore, the business owners wanted to convey a more personal and friendly attitude (as opposed to a strictly business attitude) for their customers through this website. 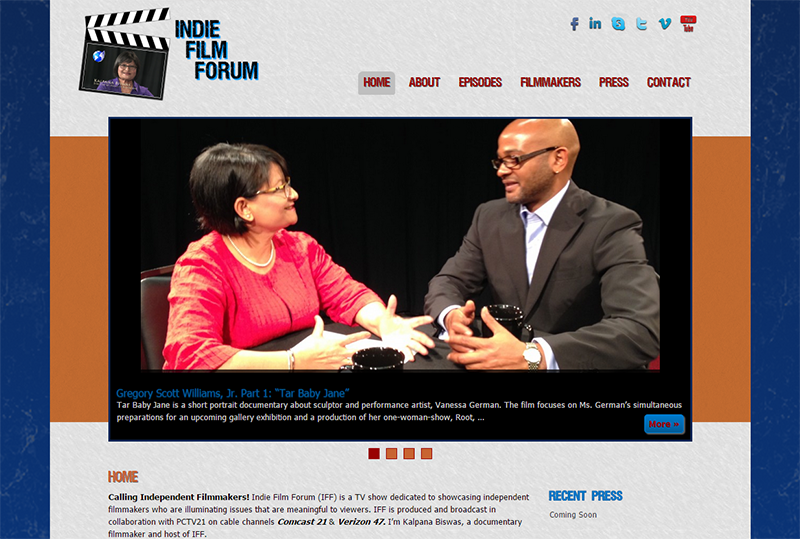 This website was developed for a public access television program, airing in Pittsburgh. Kalpana Biswas, the show’s host, needed a website to give the program an online presence, promoting and streaming each episode after it initially aired on television. She also needed the website to provide additional information about the program itself and each of the filmmakers interviewed on the program. With routine site updates for each new episode of the program, I used WordPress to manage the site’s content, using premade plug-ins and adapting design themes.
This website was created for a local one-woman craft business. The owner wanted to display her previous craft-work through an online portfolio in order to demonstrate her skills and gain potential customers. With the site’s design, I incorporated font choices to match the client’s choice of a “whimsical” and “imaginative” theme. Several animated elements were also attached to the site’s design in order to add to that whimsical feel without distracting from the site’s overall design or content.
This website was developed for a local women’s roller derby team. The team wanted to update their outdated website. I redesigned the site, adding new features to make it more user friendly. More importantly, I made it easier for site admins to make updates. This included the development of a custom plugin in addition to adapting/redesigning a new theme.
This website was developed for a documentary filmmaker from Pittsburgh, PA. She develops documentaries about various women’s issues throughout the world (mostly within the Middle East) and needed an online portfolio to display her work. Another website was created for her most recent film: Jewels of Kandahar. The design and structure for this other website mirrored that of her portfolio site. Images of this website are available within the last few frames of the image carousel.
This blog was developed for P. Andrew Miller, a writer, poet, and English professor at Northern Kentucky University. With this project, I installed and formatted a basic WordPress theme (SemPress) and formatted some of the site’s images.

This was my Senior Project at the conclusion of my degree program. In addition to demonstrating everything I’ve learned at the Art Institute, I used this project as a way to experiment with jQuery and CSS. The use of Flash and ActionScript has been declining with the introduction of HTML 5 and its inability to run on certain devices. Although I enjoy working with Flash (and hopefully it won’t completely die out), I wanted to learn alternatives. While targeted for children, this project required a lot of animations, quizzes, and interactivity, but used the least amount of Flash as possible (with the exception of the games section). 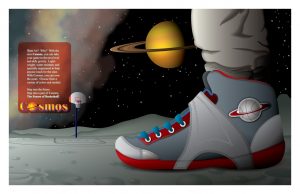 This project involved the development of a magazine advertisement for a fictitious brand of basketball shoes. The advertisement required a sci-fi theme and after a few concepts, I came to the solution of showing an astronaut wearing the shoe while playing a game on the moon. As the project developed, the location changed to one of Saturn’s moons in order to mirror and highlight the shoe’s logo. 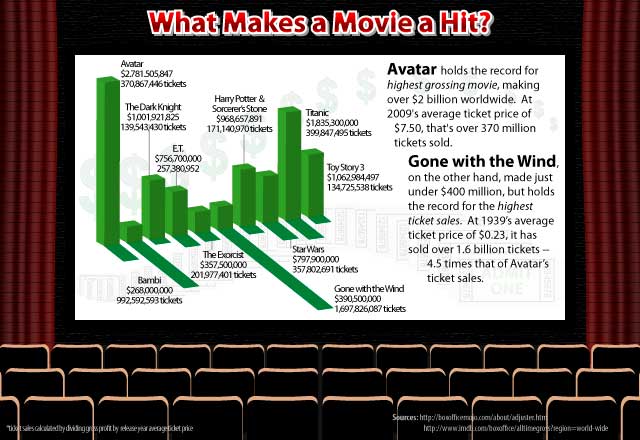 This infographic depicts movie ticket prices compared to the amount of tickets sold. Movies are typically judged by how much money they make, but is that really an accurate estimation of whether or not a movie is a success? Why are movies ranked by the amount money they make and not by the number of tickets sold? Just because a movie makes a lot of money, doesn’t necessarily mean that it’s been the most successful in terms of people seeing it. At the time of making this illustration, Avatar held the record for the most money made with average ticket prices around $7.50. This means that roughly 370,000,000 tickets were sold. Gone with the Wind, on the other hand, has sold over 1.6 billion tickets. At $7.5 a ticket, this would be roughly $12 billion, well above Avatar’s $2 billion.

Developed as a school project, this website was created for a small jewelry company. The owner only sold jewelry at parties and had considered expanding her business online. I offered to create a simple product database to show how she could make an online presence for her company. To increase user experience, registered users can choose from a list of five background style options.

This flash-based multimedia site was developed within an ActionScript course. I have a love for animals, so I wanted to develop a project that would teach children about extinction and bring awareness of the five most endangered animals according to the World Wildlife Fund in 2010.

This site was created as a final project within a PHP programming course. This project further developed a previous project, finishing content, and making it more functional, with working forms, uploads, and logins. This website served more as a members-only site for the fictitious organization while the previous project served more as a secondary bird identification site, sponsored by the client organization.

This image was created as a Photoshop-based print advertisement to redesign and update the image of a fictitious ice cream company, Jolly Humor Ice Cream. I chose to create a design that, although aimed at adults, would instantly attract the attention of children, the target market. This design enforces the idea that the product doesn’t just fulfill a basic need or provide a brief moment of joy, but instead creates precious memories that can can last a lifetime. 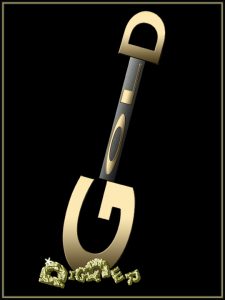 This illustration was created to demonstrate a quote or maxim, analyzing the images and associations that it evokes, and suggest those images and/or associations using only type. I chose to represent the phrase “Gold Digger” as a shovel and gold nuggets. 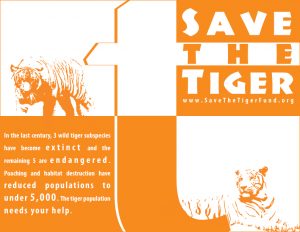 This illustration was developed as a promotional poster that created figure/ground confusion with a single ink color, one large cropped letter, and a paragraph of copy. I love tigers, so I chose to promote the Save the Tiger Fund.
This project was developed within an Interactive Authoring course. Although it was originally developed in Director with Lingo, it has recently been reengineered with Flash and ActionScript. The goal of this game was to teach kids about outer space and the 8 planets (sorry Pluto) of our solar system. The updated version of this game also included the use of random background images, double points for back-to-back matches, and timers influencing point values. Project requirements:
This frog presentation was created as a final project for a Director-based interactive authoring course. As this course was only an introduction to Adobe Director, I created a simple project targeted for children. Although it was originally created within Director, this version was re-created with Adobe Flash. Project requirements:
[my-work]
[my-contact]